Jennifer Aniston has jetted to Mexico to ring in the New Year with Justin Theroux after reportedly undergoing couple's therapy to get their relationship back on track. 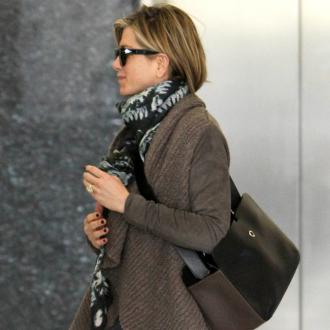 Jennifer Aniston has jetted to Mexico to ring in the New Year with Justin Theroux.

The couple, who recently sparked rumours they were on the rocks, were spotted disembarking from a private plane with their entourage in Cabo San Lucas on Friday (27.12.13), after celebrating Christmas with Justin's family in New York City.

The former 'Friends' actress looked happy and relaxed as she and Justin, 42, made their way to a waiting chauffeured vehicle to take them to their hotel.

The 44-year-old star was wearing her large sparkling engagement ring, according to the MailOnline website.

A source close to the couple recently revealed they had relationship counselling and are determined to make more time for each other in 2014.

The insider said: ''Jen and Justin love each other, they are fully committed. They had hoped to be married by now but work commitments this year meant their plans went astray.

''They have had some counselling. They both regret not spending more time together this year and they're determined next year will be different.''

The couple - who got engaged in Summer 2012 - are clearly eager to enjoy a relaxing start to 2014 ahead of their wedding later in the year.

The source added: ''Jen and Justin are looking at it like it's a party for their friends. They've downgraded the scale of their wedding. Justin is adamant it will happen in 2014 but that it will be more, 'Spontaneous and organic' than they'd previously wanted.''

'Machete Kills' star Jessica Alba, 32, was also spotted arriving in the sun-drenched hotspot for a New Year's holiday with her husband, Cash Warren, and their daughters, Honor, five, and Haven, two, on Friday.