Jennifer Aniston: 'My Wedding Was A Beautiful Private Moment'

Jennifer Aniston Has Stepped Out In Public For The First Time Since Her Wedding To Justin Theroux Earlier This Month (Aug15) And Told Reporters Their Big Day Was A "Beautiful Private Moment". 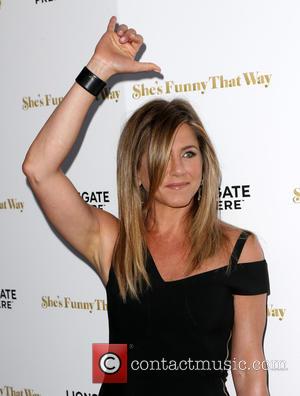 The Friends actress married Theroux in a low-key ceremony at their Bel Air home in California on 5 August (15) in front of guests who thought they were attending the groom's 44th birthday party.

The newlyweds subsequently jetted off to Bora Bora in French Polynesia for their honeymoon, and Aniston went back to work on Wednesday night (19Aug15) to attend the Los Angeles premiere of her movie She's Funny That Way.

During the red carpet event, Aniston showed off her wedding ring, a gold and diamond band, for the first time, but refused to give any more details about her big day.

She told ETonline.com, "I'm not telling you any of that stuff, no... We had the beautiful luxury of having a beautiful private moment and I'm going to be selfish and keep it that way."

When asked what she liked most about her wedding day, Aniston told U.S. TV show Extra, "The fact that we were just able to have the most peaceful, private experience and with a bunch of very extraordinary, wonderful - trustworthy obviously - people," and she told Access Hollywood how the couple managed to keep the ceremony a secret, adding, "Where there's a great will, there's a way... It can be done."

Theroux was unable to join his new wife at the premiere as he was in Texas filming TV show The Leftovers.