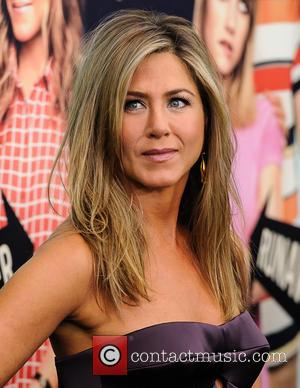 Fellow actors Don Cheadle, Isla Fisher, Will Arnett, Malin Ackerman, Kristen Bell and her fiance Dax Shepard were also in attendance, as were comedians Jimmy Kimmel and Ellen DeGeneres, although Aniston's best pal, former Friends co-star Courteney Cox, was absent from the festivities after reportedly breaking her wrist on vacation in Mexico.

Guests were treated to a buffet-style meal as they mingled at the couple's newly-renovated Bel Air mansion and they toasted the birthday boy with glasses of champagne.

The celebration took place on the one-year anniversary of Aniston and Theroux's engagement.

The movie beauty recently insisted they were in no rush to head down the aisle, insisting they "already feel married".