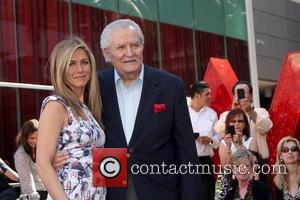 Jennifer Aniston recently unveiled her star on the Hollywood Walk of Fame. The Friends actress turned up to the event in a summery blue and white dress and looked very happy as she posed with the star.

She was joined at the ceremony by her Wanderlust co-stars Malin Akerman and KATHRYN HAIN; her Just Go With It co-star Adam Sandler; her father JOHN ANISTON and her boyfriend, Justin Theroux. Sandler introduced the actress by making a joke towards one of her early films - the 1993 horror film Leprechaun, which was also Aniston's debut film role.

In her acceptance speech, she express her disbelief at 'how surreal' it was to have a star on the Walk of Fame, which boasts stars such as Charlie Chaplin and Audrey Hepburn. She goes on to say: 'I've walked the streets of Hollywood Boulevard,' which raised a laugh and a cheer from the crowd, prompting Aniston to joke: 'Oh please, I didn't mean like that!' She continues: 'This has always, just sort of been in the back of my mind; it probably wasn't even a dream. it was one of my wildest dreams.'

Aniston is known for her roles in romantic comedies such as Bruce Almighty and He's Just Not That Into You; more recently, she has starred in Horrible Bosses, an altogether different type of movie. She achieved success as Rachel Green in the hugely popular sitcom, Friends, which ran for ten seasons. However, none of her cast mates from the show attended the ceremony.