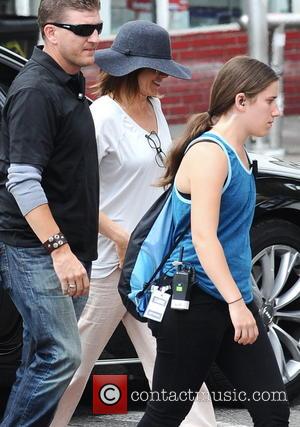 Jennifer Aniston's fiance Justin Theroux appears to have dismissed reports suggesting the couple is set to wed in Mexico on Saturday (26Jul14), by joking about the date on a late night Tv show.

Speculation about the couple's big day went into overdrive this week (beg21Jul14) when sources told America's tabloids that Aniston and Theroux were planning to jet off to Mexico to exchange their vows this weekend.

But Theroux joked about the story during an appearance on pal Jimmy Kimmel's show on Thursday (24Jul14).

When the host quizzed him about the cover story on the new issue of Star magazine, Theroux shot back, "I wish Us magazine (sic) would put that on my calendar!"

He didn't comment further, but recently told reporters at a red carpet event that he and Aniston were in no rush to get married.