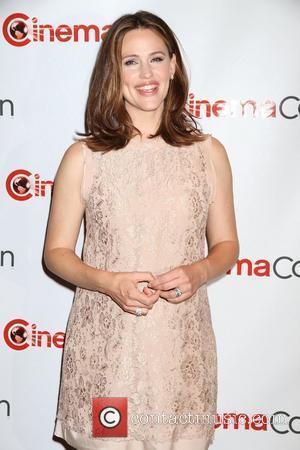 Jennifer Garner cut a striking figure on the red carpet at CinemaCon last night (April 25, 2012). Despite having two young girls and a new-born son to contend with at home, the Juno actress was showing little sign of tiredness as she arrived as guest of honour, after being named Female Star of the Year.
Garner - who celebrated her 40th birthday last week - looked stunning in a nude lace Dolce And Gabbana dress, a pair of heels and minimal make-up. She posed for photographers waiting outside at the convention in Las Vegas, before heading in to enjoy her evening. Jennifer's husband Ben Affleck wasn't accompanying her last night; presumably he was at home looking after their daughters Violet and Seraphina and the newest addition to the Affleck-Garner clan, young Samuel. Jennifer was in good company, nonetheless, with Hollywood stars such as Mila Kunis, Tim Burton, Johnny Depp and James Franco all in attendance at the industry event, according to Hello magazine
One of the highlights of CinemaCon so far has been the unveiling of a 10 minute promo clip of Peter Jackson's forthcoming movie 'The Hobbit.' Using state of the art-technology which allows the movie to be shown at 48 frames per second, rather than the standard 24, the clip was met with a mixed response. Some thought the overall effect was cheap; others said that it had made them think twice about the appeal of the new technology.