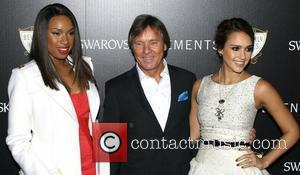 Jennifer Hudson signed up for a role in the Farrelly Brothers' new Three Stooges movie as a tribute to her late mother, who loved the slapstick trio.
The Oscar-winner will show off her comedic talents when she plays Sister Rosemary alongside Jane Lynch as Mother Superior in the upcoming adaptation, due for release next year (12).
Hudson admits the film has a lot of sentimental meaning as her mum Darnell, who was killed in 2008, was a big fan of the Stooges.
She tells Ebony magazine, "It's so different from anything I've done. I play a nun. I feel like I'm getting my feet wet in comedy. Another reason I took this role is because my mum was a huge fan of the Three Stooges."
In October 2008, Hudson's mum and her brother Jason were gunned down in their Chicago, Illinois home, while her seven-year-old nephew Julian King was found dead in a car nearby three days later.