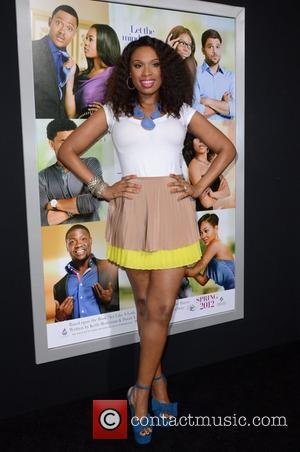 Jennifer Hudson performed a sombre version of Whitney Houston's phenomenally popular hit single 'I Will Always Love You' at tonight's Grammy Awards (February 12, 2012). The hit was written by Dolly Parton and made famous by Houston when she recorded it for the soundtrack to the film The Bodyguard and released it as a single in 1992.
Hudson's version was a stripped down affair, as she performed under a spotlight. She did not speak, either before or after the performance. Rather than the bombast of Whitney's performance, Hudson kept it low key, with a note-perfect performance. When she finished, the applause from the audience at the Staples Centre was rapturous. Hudson's Houston tribute had overtaken Adele as the performance that people were most keen to see, following Whitney Houston's death on Saturday (February 11, 2012). Houston, who died at the age of 48, in a Beverley Hills hotel, was considered one of the greatest vocal talents of her time, though her life has been blighted by personal troubles in recent years.
Whitney Houston's version of the song became a massive global hit for her. The single was at the top of the Billboard Hot 100 for 14 weeks, making it the longest-running number one single from a soundtrack album. Whitney Houston has been an influence on a number of contemporary artists, such as Rihanna and Jessie J. The cause of her death has not yet been confirmed.