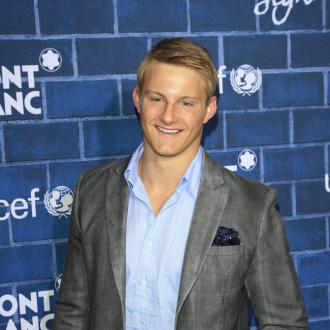 Jennifer Lawrence's 'Hunger Games' co-stars are ''so proud'' of her success in 'Silver Linings Playbook'.

The 22-year-old actress has won a host of Best Actress awards including a Golden Globe and an Independent Spirit gong for her role in the David O. Russell directed movie and Alexander Ludwig revealed he and her other 'Hunger Games' castmates will be rooting for her at the Academy Awards today (24.02.13).

Speaking at the Montblanc and UNICEF 'Signature for Good 2013' charity brunch at the Hotel Bel-Air on Saturday (23.02.13), Alexander exclusively told BANG Showbiz: ''We're all so proud of Jen, she was so fantastic in 'Silver Linings Playbook'. She's a wonderful actress so of course we'll be rooting for her at the Oscars. She deserves all of her success.''

While Alexander, 20, won't be at the awards, he is looking forward to catching up with his former co-star at the after parties.

He explained: ''I actually prefer the Golden Globes, it's such a fun ceremony because you get to sit at tables and have dinner. However, I am excited about the Oscar after parties so it should be a fun night.''

Alexander joined a host of stars at the charity brunch, including special guest Hilary Swank who spoke about the importance of the 'Signature for Good' initiative and her recent charity visit to Ethiopia, and Rosario Dawson, Emmy Rossum, Jesse Metcalfe, Samantha Barks, Mimi Rogers, Rachel Griffiths and Billy Zane.

For every part of the 'Signature for Good' collection sold between March 1, 2013 and March 31, 2014, Montblanc will donate part of its proceeds to raise at least $1.5 million to support UNICEF education initiatives worldwide.