Jennifer Lawrence Dishes The Dirt On Relationships, Living With Her Parents And Being 'Obese' 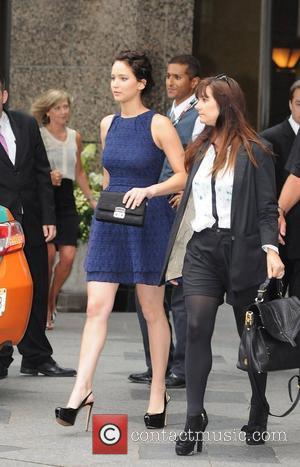 By far one of Hollywood's brightest shining rising stars, Jennifer Lawrence seems as down to Earth as can be and really opened up during a recent interview with Elle magazine. In it, she spoke about her universally praised film roles, her relationship with British actor Nicholas Hoult and most absurdly of all, on being considered "obese."

"In Hollywood, I'm obese," she told the magazine in the interview earlier this week. Lawrence is nobodies idea of obese, unless you're utterly mad because the girl has a body to die for, but she went on to say that her choice not to be a stick-thin actress like so many others is down to her dedication as a role model for young people, "I'm never going to starve myself for a part. I don't want little girls to be like, 'Oh, I want to look like Katniss, so I'm going to skip dinner."

Lawrence goes on to talk about living with her parent too, as the thought of living alone in a large Beverley Hills mansion rather than being surrounded by her family just seemed strange and unappealing to the young actress, as well as discussing her "best friend" and boyfriend Nicholas Hoult, "He's my favorite person to be around and makes me laugh harder than anybody."

Lawrence also made time to plug some of her upcoming projects, which not only include follow-ups to the Hunger Games and X Men franchises, but also the new dark comedy co-starring Bradley Cooper, Silver Linings Playbook. The film, which hits cinemas later this month, is already generating Oscar buzz, with Lawrence tipped to receive her second nomination for a coveted trophy. Still, if the nod doesn't come, we doubt she has too much to worry about because there's definitely more acclaim in the pipeline for the actress.