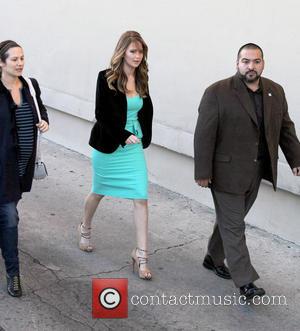 Jennifer Lawrence is fast becoming known as much for her endearing and, at time, goofy personality as she is for her Golden Globe winning, SAG Award winning, Oscar nominated acting talents. Appearing on Jimmy Kimmel Live! with the titular host she couldn't help but tell him and the audience about her ordeal with chest x-rays that revealed a little more than she had hoped for.

Lawrence has been suffering with 'walking pneumonia' otherwise known as atypical pneumonia, the . She went to have an xray to check out her lungs, but when she got there, as she says: "[I] discovered that my breasts are uneven."

"I was like standing there with these doctors and they're like looking at my lungs and I just couldn't - it felt like an elephant in the room - and I was like, 'Are my breasts uneven?' And they were just kind of, like, stifled and uncomfortable, obviously. So I kept thinking, 'Well, I'm gonna dig myself out of this hole by bringing it up again.'... [The doctor] was like, 'All right, our radiologist will get back to you about your lungs.' And I was like, 'and my breasts?'"

Although she's often brazenly honest about herself (like saying her butt looks like it belongs to a 90 year old woman in a photo), she may have had added fuel to that candid fire. "Your producer made me do two shots of tequila and a beer," she told Kimmel. "But the beer was my decision."

Lawrence is currently starring in Silver Linings Playbook alongside Bradley Cooper and has also been working on the second instalment of The Hunger Games.