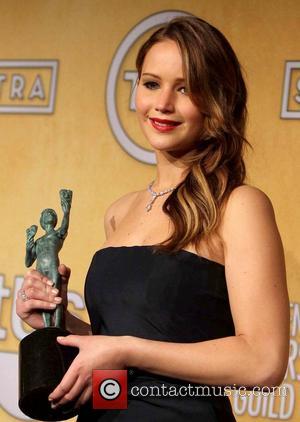 Wardrobe malfunctions and awards ceremonies go in hand in hand, right? But what exactly happened to Jennifer Lawrence’s dress at the Screen Actors Guild? She clearly had a bit of a struggle getting away from her table and up onto the stage and experienced actresses like Nicole Kidman and Naomi Watts looked on sympathetically. As she made it up to the stage to collect her award though, it looked as though part of her Christian Dior gown fell down, exposing part of her thighs – a part of her thighs that presumably wasn’t supposed to be on view.

E! Online have cleared up the confusion, having seen the couture gown on a catwalk show last week. The long blue strapless dress on the catwalk had clear divisions, connected by sheer lining. Lawrence’s dress had the lining hidden, though, so you couldn’t tell that the dress was tiered, until a combination of Jennifer lifting the top part and possibly stepping on the bottom part caused two of the sections to momentarily drift apart. So, no biggie there then. We’ve seen far worse malfunctions than this and in actual fact, the expensive designer dress was still intact.

Jennifer Lawrence, who is suffering from pneumonia, won the Best Actress award for her role in Silver Linings Playbook, which she starred in alongside Bradley Cooper. Lawrence doesn’t seem to be having a whole lot of luck at awards ceremonies this year. At the Golden Globes, she made a quip about beating Meryl Streep that got taken completely out of context and forced her to have to clear up her intentions. Luckily, we’ve cleared this debacle up for her.