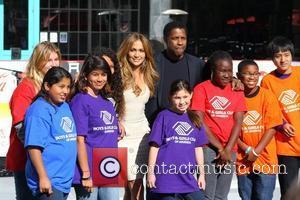 Jennifer Lopez - The 41-year-old R&B star Jennifer Lopez says she is disappointed at the swift exit of American Idol's female contestants and admits she had been reluctant to criticise the two remaining female singers, reports E! Online.
Lopez, who was recently voted the world's 'Most Beautiful Woman', says she is still worried about Haley Reinhart after her rendition of Blondie's 'Call Me' on last night's show. Every eliminated finalist so far has been a woman and Lopez noted, "I don't want any of the girls to go home". The show's other remaining female singer, 16-year-old Lauren Alaina is expected to make it safely through to next week's show after performing Miley Cyrus' 'The Climb'. Before taking the stage, Idol mentor and Interscope chief Jimmy Lovine told Lauren that he thought she was "a much, much stronger singer than Miley Cyrus". After blasting out the song, Steven Tyler praised the youngster, saying, "I love what you bring to a song, and I love more what a song brings to you".
Other performers to gain plaudits from Jennifer Lopez and company included Casey Abrams, who sang a jazzy rendition of Nat King Cole's 'Nature Boy' from the movie 'The Boy With Green Hair'.