Jennifer Lopez Is Eager To Line Up Another Big Name Collaboration By Hitting The Recording Studio With Her Home Co-star Rihanna. 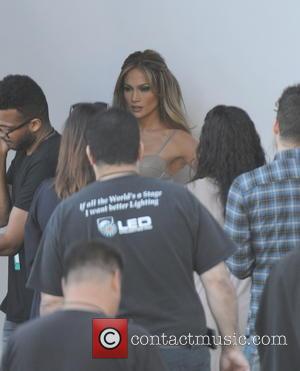 Picture: Shots of American pop star Jennifer Lopez as she showed off her fantastic figure in a tight beige dress.Jennifer was on her way into a...

The On The Floor hitmaker, who recruited Pitbull and Iggy Azalea for recent hits, reveals she has always admired Jay Z's protegee and would jump at the chance to team up with her properly after voicing the role of her character's mother in the new animated feature.

She tells E! News: "I'm a huge Rihanna fan and I feel like she's such a girl's girl, which I love, because I'm a girl's girl and she seems very sweet. Who wouldn't (want to collaborate with her)?"

And it seems the love is mutual.

Rihanna tells Grazia magazine: "When you hear Jennifer, her voice has that warmth and safeness that my mother's has. It has that tone. It's almost like it can hug you. I love her. She is great."