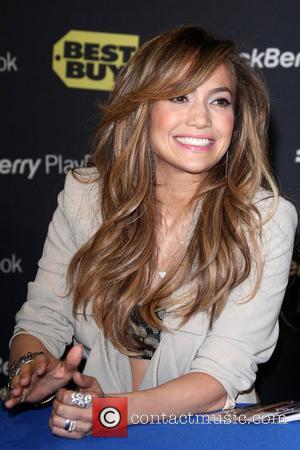 Picture: Jennifer Lopez at the launch of the BlackBerry PlayBook and her new album, 'LOVE?' at Best Buy Los Angeles, California - 19.04.11

Jennifer Lopez - The 41-year-old pop singer Jennifer Lopez, kissed American Idol contestant Casey Abrams on last night's live show. Abrams serenaded Lopez with his faultless performance and stole a kiss from the 'On The Floor' star to the delight of the live studio audience, reports the Huffington Post.
The soulful Abrams impressed with his unique rendition of Maroon 5's hit 'Harder to Breathe'. Midway through the performance, the fan favourite made his way over to the judges' desk and kissed Lopez, who blushed and took the unexpected gesture with good humour. Casey received unanimous praise from the judges after his performance, with Steven Tyler remarking, "There are millions of people in America that are really angry, because you pissed them off because you're so fuc*ing good". Randy Jackson attempted to cover up Tyler's expletive outburst but the Aerosmith frontman was reportedly given a 'talking to' by the show's producers, according to Entertainment Weekly. Lopez jokingly noted, "Casey's got soft lips", adding, "I loved it.the performance!"
Jennifer Lopez was also full of praise for Haley Reinhart, who sang Adele's hit song 'Rolling in the Deep' and for Jacob Lusk who sang Luther Vandross' emotional track 'Dance with My Father'. Another of the American Idol contestants will be eliminated on tonight's results show.