Jennifer Lopez is said to be in negotiations with bosses of The Axis, Planet Hollywood, in Las Vegas about signing a $350,000-a-show deal, meaning she would earn $26.3 million for the residency over a one or two-year period. 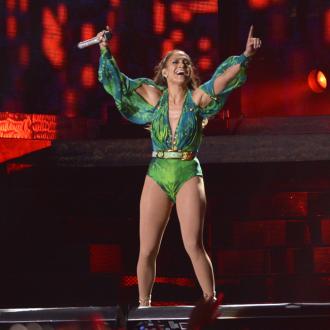 Jennifer Lopez is in talks over a $26.3 million deal to perform in Las Vegas.

The 45-year-old beauty has entered negotiations with bosses of The Axis, Planet Hollywood about receiving $350,000 per show as part of a 72-gig deal over a one or two-year period, according to gossip website TMZ.

The huge sum per performance is said to be even more than Britney Spears' $310,000 to play a show at the same venue.

But Britney is set to earn more than her fellow singer as she reportedly signed a deal to perform 96 gigs over two years, meaning she will earn $29.7 million overall.

However, neither Jennifer nor Britney can match Celine Dion's huge deal as the music legend - who is on an indefinite hiatus to care for her 72-year-old spouse René Angélil, who has throat cancer - earns an incredible $33.3 million for 70 shows a year.

Country couple Miranda Lambert and Blake Shelton were recently said to have rejected a $1 million offer to at play three shows at Caesars Palace's The Colosseum in Sin City, and their reported counter offer of $1.25 million for the hat-trick of gigs, $416,000 for each show, was also turned down.

The money might come in handy for Jennifer after she splashed out $22 million on a plush four-bedroom pad in Manhattan recently, according to the New York Daily News.