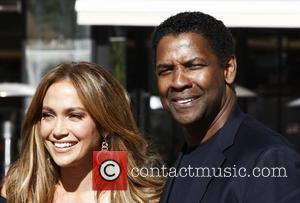 Jennifer Lopez is so desperate to land a guest slot on Glee, she pesters Matthew Morrison at parties and asks him to recommend her to the show's creator RYAN MURPHY.
Hollywood A-listers are queueing up to appear on the U.S. TV hit, with Anne Hathaway and Javier Bardem both recently expressing their desire to be part of the series.
And Lopez is so determined to land a cameo role, she always targets lead star Morrison at celebrity parties and begs him to speak with his boss in a bid to win him round.
He tells Britain's Glamour magazine, "J. Lo definitely wants to (appear on the show). She runs over to me at parties asking whether I've 'spoken to Ryan yet' because she'll 'do anything' to be on the show. She and her husband Marc Anthony are obsessed with Glee."