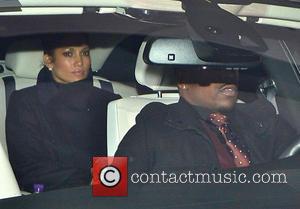 Jennifer Lopez and Casper Smart are expanding their family. No, she's not pregnant again (yet). After more than a year together, the couple have adopted a puppy together - a little brown boxer dog named Bear. Smart, 25, who works for Lopez as a backup dancer, tweeted the news on Thursday (January 17, 2013), saying, "Introducing the new addition to the family..." before uploading a snap of the pooch.

Lopez, a mother of 4-year-old twins Max and Emme with ex-husband Marc Anthony, re-tweeted the announcement with the added note, "So happy! LilbabyBear Could get confusing!" You see, Bear isn't just the name of the couple's new dog, it's also their pet name for each other. On the couple's one-year anniversary, Lopez wrote to Smart, ""BEAR!!!!!!!!!!!!!! Today is OURS!! Thank you for sharing your beautiful smile with me everyday!" Her man responded with, "Happy 1 year anniversary to the most gorgeous, kind, sweet, funny, beautiful lil Bear in the world."

After a shaky couple of months last year, during which it was speculated that the couple may split, Lopez and Smart seem happier than ever. "[Casper's] fantastic; he's like my best friend," the former American Idol judge recently told Harper's Bazaar, "I can tell him everything, when I'm feeling down, when I'm feeling good. He gives moral support, endless love and support."