Jackson: 'Murray Was Motivated By Money' 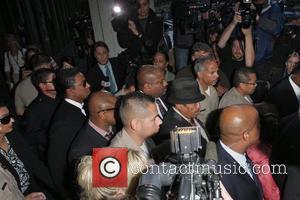 Picture: Jermaine Jackson and Joe Jackson Departures at Los Angeles Superior Court for the verdict in the trial of Dr. Conrad Murray for the manslaughter...

Jermaine Jackson is convinced his brother Michael's physician Conrad Murray lost sight of his responsibilities as a doctor while treating the superstar and became completely motivated by money.
Murray was found guilty on a charge of involuntary manslaughter this week (beg07Nov11) after a jury established he caused the King of Pop's death in 2009 by sedating the star with a surgical-strength anaesthetic.
Michael's brother Jermaine has now spoken about about Murray's trial, revealing he felt "numb" when the guilty verdict was announced on Monday (07Nov11), and insisting the physician lost his way when he began focusing more on the financial reward than on his famous patient.
He tells Britain's Daybreak breakfast show, "For... a doctor to be compensated very highly for what he was going to do, he should have had his (Michael's) best interests at heart. He should have been more responsible. Michael trusted him. I think the focus wasn't on the care of Michael, it was on the financial gain."
Jermaine reveals the family is now focusing on a wrongful death lawsuit which has been filed over the singer's passing.
He adds, "As far as closure goes, we have been through the worst of it. We were looking for answers, and we got some, but we hope the wrongful death suit will bring more."