Jerry Lewis Has Finally Agreed To Release His Infamous Holocaust Movie The Day The Clown Cried, But Not For Another 10 Years. 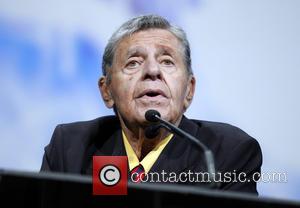 The funnyman wrote, directed and starred in the 1972 film, about a clown forced to lead Jewish children into the gas chambers of a Nazi concentration camp during World War Two, but he was unhappy with the finished product and vowed never to share it with fans.

In 2013, a clip from the project was unearthed from a Flemish news show and emerged on YouTube.com. It featured Lewis in costume as the clown. Other scenes depicted him giving directions behind the camera.

The 89 year old has now struck a new agreement with organisers at the Library of Congress over his film collection and he has stipulated the film can be released in another 10 years, according to the Los Angeles Times.