US comedy king Jerry Seinfeld has dipped his toes into the waters of hiphop in an unlikely collaboration with D.C rapper, Wale. 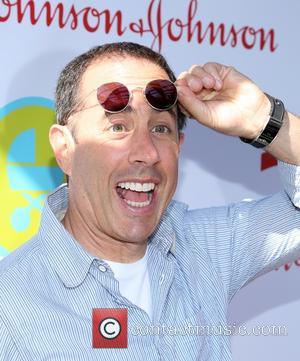 Seinfeld star Jerry Seinfeld dropped by in the studio when Wale was recording his new album The Gifted. It may sound like two more unlikely performers couldn't collaborate to top team Wale/Seinfeld but their partnership hasn't exactly emerged out of the blue.

Wale's admiration of 59 year-old Seinfeld became clear when he released 2008's The Mixtape About Nothing, which references his favourite TV show and included cameos from Julia Louis-Dreyfus, who plays Elaine in the NBC show, along with dialogue snippets and a mixed up version of the theme music.

Seinfeld - who's latest project includes the online series 'Comedians in Cars Getting Coffee' - said he's a Wale admirer and is scheduled to spit some lyrics on Wale's planned post-Gifted work The Album About Nothing. The video from the studio shows Seinfeld appearing as though he'd wandered into the wrong studio and forcing his way on to Wale's tracks.

Watch Jerry Seinfeld In The Studio With Wale:

Wale couldn't contain his excitement at having his hero wanting to be involved in his work: "This is the greatest day of my professional life...got my favorite human being in the studio, telling jokes." Seinfeld explained to The Washington Post that his involvement came about when he'd received Wale's The Mixtape About Nothing and the pair met after Wale's show in Philedelphia: "we hung out after the show and I found him to be a nice guy and very dedicated to his thing. He's a pure artist to me. So I just dug him. Then he said, "Why don't we do something together?" And that was so insane that, of course, I had to say yes." He also admitted he saw parallels between Wale's 'irritation-based' tunes and his characteristically grouchy Seinfeld.

Wale's new album The Gifted is available now, we'll have to wait until next year until Jerry's The Album About Nothing fully emerges.