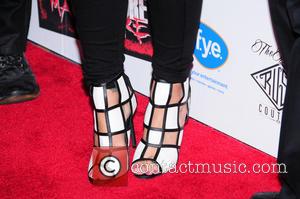 Picture: Jenni JWoWW Farley - A host of celebrities turned out for the New York premiere of the new horror/comedy movie 'Jersey Shore Massacre' at AMC...

Jersey Shore star Mike 'the Situation' Sorrentino's arraignment for his tax fraud case has been delayed to allow him to film a new reality show.

The Tv star and his brother Marc were indicted last week (ends03Oct14), and turned themselves in to federal authorities in New Jersey.

He was due to appear in a Newark, New Jersey court to be arraigned on Monday (06Oct14), but the hearing has now been rescheduled for 23 October (14) after Sorrentino's lawyer explained he is filming Marriage Boot Camp in Los Angeles with his fiancee until 19 October (14), according to the New York Post.

If convicted, the Jersey Shore star faces up to nine years in federal prison after allegedly failing to pay full taxes on earnings of $8.9 million (Gbp5.56 million).