'Not Letting Go' hitmaker Jess Glynne has told revellers at V Festival that she sounds like a ''16-year-old'' again following her vocal surgery. 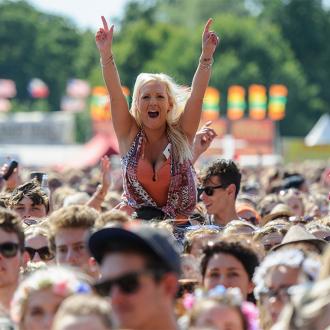 The 'Not Letting Go' hitmaker recently had surgery on her vocal chords and was heard telling friends at V Festival she was feeling much better.

Mark Ronson - who arrived at Hylands Park, Chelmsford wearing a boat print shirt - remarked how he was looking forward to ''warming up the crowd'' ahead of Jess' set.

Example told fellow festivalgoers how excited he was to see Sam Smith's performance, whilst the 'Lay Me Down' hitmaker defied his jetlag to catch Marina and the Diamonds' performance.

He later shared a photo of the star taking to the stage, captioning it: ''So happy I got to catch @marinasdiamonds !!!! So talented and looking HOT. (sic)''

Meanwhile, over at Weston Park in Shropshire, pink was the order of the day as celebrities paid homage to the colour.

And McBusted's Dougie Poynter turned up to support his girlfriend Ellie Goulding ahead of her performance this evening, even reportedly arriving before the 'Love You Like I Do' hitmaker.