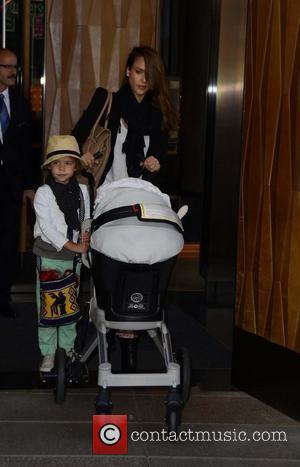 Jessica Alba, Jeremy Renner and Glee's Dianna Agron were among the young Hollywood stars who met with Barack Obama on Thursday (07Jun12) to drum up support for the U.S. President's re-election campaign.
Zachary Quinto, Brandon Routh, Ben MCKenzie, Bryan Greenberg, Ian Somerhalder, Jared Leto and Sophia Bush also attended the early-morning private meeting with Obama at the Beverly Hilton Hotel in Beverly Hills.
The stars involved in the Young America Effort are helping Obama secure four more years in the White House by urging their fans to cast their votes for him in November (12).
The actors wasted no time utilising Twitter.com to document the event, professing their admiration for Obama to their millions of young followers.
Agron tweeted, "(Obama is) maybe the only man I truly get nervous around. Worth the early wake up call," while Alba wrote, "Got up bright & early to hear Barack Obama speak with an awesome group."
Somerhalder added, "Totally surreal morning. Met up with some friends, had coffee with President Obama now tweeting. The 21st century... Let's do this... Just spent my morning with this man talkn (talking) green energy, a better America & being a young American. Wow."