Jessica Alba celebrated her fifth wedding anniversary to Cash Warren by posting a montage of pictures of the couple and referring to him as her ''best friend'' and ''confidant''. 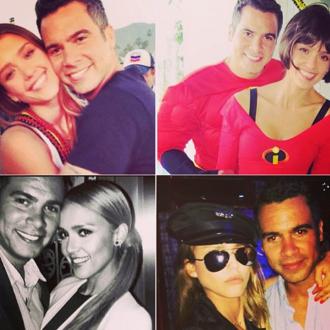 Jessica Alba shared a gushing tribute to her husband on their fifth wedding anniversary.

The 'Sin City' actress celebrated five years of marriage to movie producer Cash Warren yesterday (19.05.13) and she expressed her joy at their milestone on her Instagram account, posting a montage of various photos of the couple together and calling her spouse her ''best friend'' and ''confidant''.

The 32-year-old beauty wrote: ''#happyanniversary #mylove+myheart+mybestfriend+myconfidant ur my everything @cash_warren I love u (sic)''

Jessica later posted another series of snaps - including one of the couple dressed up as superhero characters from Disney's 'The Incredibles' and of her in fancy dress as a police officer - and wrote: ''To another #5yrs #[email protected]_warren @cashwarren (sic)''

Cash reciprocated with his own tribute on Twitter, but he couldn't resist a little joke at his wife's expense.

Jessica met Cash in 2004 on the set of her film 'Fantastic Four' and the pair became engaged three years later.

The 'Machete' actress gave birth to the couple's first daughter Honor, five, in June 2008 - just two weeks after their nuptials - and they later welcomed Haven, three, in 2011.