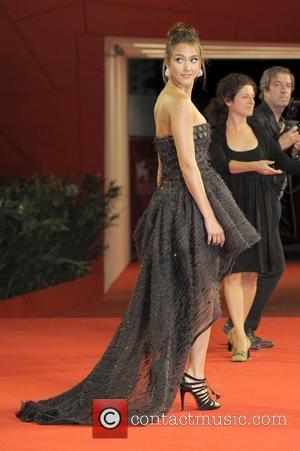 Jessica Alba is transfixed over the body of Michelle Rodriguez, after admitting to her co-star, "The whole time I'm watching you, I'm drooling". In the interview with MTV, Alba and Rodriquez discussed their new movie, 'MAChete', which also stars Robert De Niro and Steven Seagal. When examining the film's promotional poster which features Rodriguez, Alba enquired, "I want to know: Who sculpted that body? Because the whole time I'm watching you, I'm drooling. She doesn't have any cellulite, not an ounce of fat! What is going on?"
Rodriquez then responded, explaining that she had undergone three weeks of training to prepare for the role - to which Alba retorted, "You looked insane". The stars also discussed the shower scene that features in the upcoming Robert Rodriguez directed movie, but when pressed on how she feels acting nude, Alba revealed that post production creates the illusion, stating, "Oh no, no, no. I had undies on, and I had other stuff on, and they just sort of etched it out in post [production]. That's not really me. I'm better covered up."
'MAChete' - which is released in the US today (3rd September 2010) - follows an ex-Federale who, after being betrayed by the organisation that hired him, seeks a brutal revenge against his former boss.