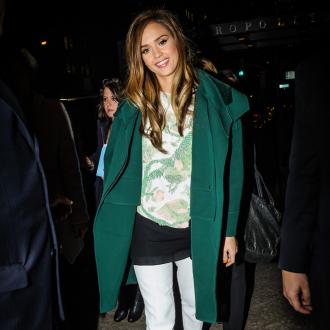 Jessica Alba is ''much more grounded'' than Gwyneth Paltrow.

The 'Fantastic Four' actress and eco-friendly entrepreneur - who recently released her new book 'The Honest Life: Living Naturally and True to You' - thinks that although she and the 'Iron Man' star probably live a ''similar lifestyle'' these days, her tips are more relatable than the advice Gwyneth gives on her blog goop.com and in her new healthy cookbook 'It's All Good' because she grew up less well off.

Speaking to the New York Daily News, the 31-year-old actress said: ''Alicia Silverstone is a vegan, so she's the extreme side of it. Gwyneth Paltrow probably lives a very similar lifestyle, but I didn't grow up with a bunch of money, so my tips are much more grounded: repurposing things and making things at home.''

The mother-of-two - who shares daughters Honor, four, and Haven, 19 months, with her husband Cash Warren - claims that her lifestyle tips are also much less expensive and extreme.

She said: ''I absolutely do these things. That's why I wrote the book. There's lots of options, like delivery services for fresh produce that is organic, if people just want to do a couple of things in the book that are super-easy...You can take what you want from the book.''

Gwyneth - who is married to Coldplay frontman Chris Martin - recently came under fire for admitting that her children Apple, nine, and Moses, seven, sometimes feel hungry after dinner because they don't eat carbohydrates.

The 40-year-old blonde star said: ''Sometimes when my family is not eating pasta, bread or processed grains like white rice, we're left with that specific hunger that comes with avoiding carbs.''