Jessica Alba's children go crazy when they have too much sugar but she lets them have a treat occasionally. 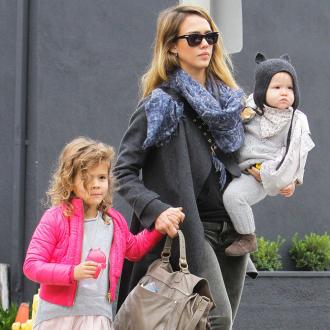 Jessica Alba's children go crazy when they have too much sugar.

The 'Machete' actress tries to make sure her daughters, Honor, four, and Haven, 19 months, have as healthy a diet as possible but allows them a treat every now and them.

She said: ''I try to give my kids whole foods and grains as much as humanly possible. They're little spazzes when they have too much refined sugar. But everything in moderation.''

While Jessica - who is married to Cash Warren - tries to protect her children from chemicals, she does think some parents go too far.

She told People magazine: ''I have friends who won't give their kids plastic toys, I'm like, 'You know what? I'm OK with Honor having Barbies.' ''

Jessica has previously admitted having children made her less critical of herself and even though she knows her body has changed a lot since she became a mother, she doesn't care because her priorities have changed.

She explained: ''I don't really care about my body image anymore because it just doesn't matter now that I have children. Instead, I focus on my health, feeling strong, and making sure I'm up and running so I can spend that all-important time with the girls.

''Becoming a mom has definitely made me feel more confident and secure than I ever did in my 20s. Even though I can't ever get down to my pre-baby weight before having Honor, my jeans don't zip up the same way, and things just hang differently, I feel completely comfortable in my skin and my idea of perfection has changed.''