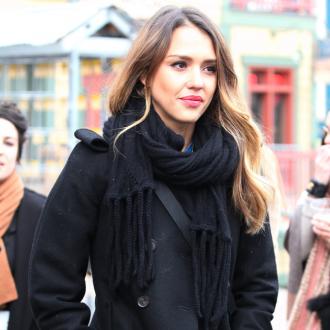 Jessica Alba recently feared she was suffering a stroke.

The 'Sin City' actress - who has two daughters, Honor, four and Haven, 18 months, with her husband Cash Warren - had a major health scare in the middle of the night after her arm went numb.

The 31-year-old beauty told 'Jimmy Kimmel Live!': ''My whole arm was numb, and then I got a cold sensation from the back of my neck up to the front. And then I was like, 'I think I can't move my face.'''

Jessica rushed to the hospital to get a CAT scan and an MRI. After being fully checked out she was assured she did not have heart problems.

She said: ''They all said, you had all the signs of a stroke if you were much older.''

She later discovered that she has developed carpal tunnel syndrome, possibly from spending too much time on her computer.

Jessica, who runs her own organic baby product business The Honest Company, previously revealed that she tries to stay fit and healthy but she hates working out.

''And sometimes I do sprint intervals just because I hate working out. Anything where I have to do something but I can get my mind off of doing it, that's so much better for me than anything that's repetitive. Or the music has to be loud and I have to be moving.''