Will There Be A Fantastic Four Three? 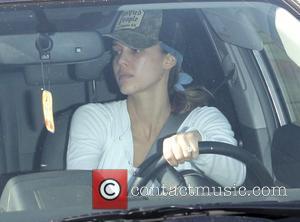 Picture: Jessica Alba leaves a gym and covers her face from the paps. West Hollywood, California - 26.12.07

Hollywood starlet Jessica Alba has claimed that there will be another Fantastic Four sequel.

Speaking to Coming Soon, the actress has said that the third part of the superhero franchise has been delayed by the writers' strike.

"The writers' strike and the impending actors strike has kind of put a wrench in everything production wise," she said.

"That film takes a lot of prep, a good six months of prep and about six months to shoot. With the strike, I think, maybe it's put on hold".

In the same interview Jessica also revealed that she knows little about her upcoming role in Sin City TWO, saying "I haven't read the script. I don't know anything about it."

The mum-to-be recently disclosed that she is nervous at the thought of breastfeeding her Offspring saying that she has been dreaming about it.

In an interview with EXTRA she added that she will not be rushing to get back into shape like many celebrity mums.

"I try and eat healthy as possible, because it's good for the baby, exercise, as long as I don't gain too much too fast- that's the key," Jessica continued.