Jessica Biel has confessed she couldn't stop crying when new husband Justin Timberlake serenaded her as she walked down the aisle. 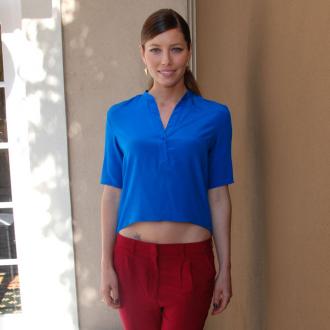 Jessica Biel started crying when Justin Timberlake serenaded her walk down the aisle.

The groom's special gift to his wife was to sing an original song he wrote for her and perform it as she walked down the aisle at their Italian wedding last Friday (19.10.12) and the actress just couldn't hold back the tears.

Jessica said: ''That definitely started the tears. Not just for me either, for pretty much everyone who was there.''

Justin added: ''I figured if there was going to be something I was going to be able to offer it was to sing her down the aisle. Grown men were weeping. Hopefully it's because I didn't sound bad.''

Jessica also revealed she had some slight nerves before the ceremony, which was held at the Borgo Egnazia resort in Puglia, Southern Italy.

The 'Total Recall' star told People magazine: ''I had a little bit of butterflies. I was about to stand up in front of my family and friends and bare my soul for the person I love. It was terribly emotional. But once I saw Justin I was calm. I thought, we got this.''

However, there were also some moments of humour even during the vows which were ''filled with our love for each other and what this means for us,'' Justin revealed.

Yet, he added: ''I can't let more than 10 minutes go by without some moments of comedy so they were funny and heart-warming.''

Jessica continued: ''It was a mixture of laughter and tears during the ceremony, it was a rollercoaster.''

The end of the ceremony, when they were pronounced man and wife was the couple's favourite part.

Justin explained: ''To hear all of our family and friends cheering at extremely loud, inappropriate decibel levels, that became the pinnacle of the ceremony. It felt perfect. It felt like everything came together.''