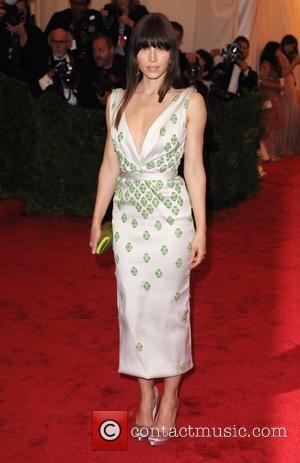 Jessica Biel may be engaged to one of the most famous Hollywood stars on the planet, but the actress had vowed that married life won't change her. Biel, 30, is engaged to Justin Timberlake and recently opened up to French magazine Gala about the couple's upcoming nuptials.
In an interview translated by People magazine, Biel said, "I don't think our marriage will change anything.It will be a challenge finding a balance between my private life, family and work, and I'm ready". The 'Illusionist' actress went on to explain that she doesn't have any plans to start a family with Timberlake, though is open to the idea of one day having children, adding, "(I'm) someone who lets things happen naturally.For me, getting married doesn't mean we should limit ourselves to some pre-defined idea. Rather, it's an opportunity to explore new things in life". A usually private Biel went on to reveal the top three qualities she values most about Justin, saying, "(His) ability to communicate well ... to be able to express his feelings.Then, loyalty. And finally, honesty".
The couple threw a lavish engagement bash last weekend, with guests including Ellen Degeneres and Lance Bass. Rumors suggest the couple are to marry in September, with Biel wearing a dress designer by ELIE SAAB.