Jessica Chastain nearly spilled out of her low-cut dress at the Golden Globe Awards in Los Angeles on Sunday (13.01.13), where she accepted the Best Actress award for her role in 'Zero Dark Thirty'. 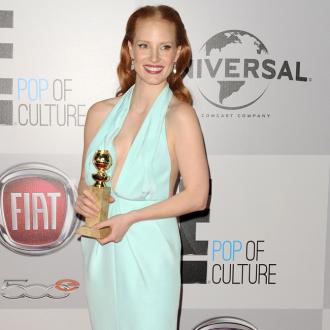 Jessica Chastain nearly spilled out of her dress at the Golden Globe Awards on Sunday (13.01.13).

The flame-haired actress almost exposed herself in her turquoise low-cut halter neck dress at the prestigious event in Los Angeles, but managed to retain her modesty as she accepted her gong for Best Actress for her role in 'Zero Dark Thirty'.

Taking to the stage to collect her prize - in which she beat Marion Cotillard for 'Rust and Bone', Dame Helen Mirren in 'Hitchcock', Naomi Watts for 'The Impossible' and Rachel Weisz in 'The Deep Blue Sea' to receive - Jessica adjusted her gown to ensure nothing was on show.

Choking back tears as she held the award, she said: ''Thank you so much to the Hollywood Press Association for this award - I wanted to be an actor since I was a little girl. And I've worked for a really long time. I've auditioned and struggled and fought on the sidelines for years.

''And to be here now in this moment... it's a beautiful feeling to receive this encouragement and support so thank you so much.''

Jessica, who has also been nominated for an Oscar and BAFTA in the same category, recently admitted she felt ''shocked'' at first to play such a controversial role, but soon realised what a strong character Maya is.

She explained: ''When I read the script, from the very beginning I was shocked that there was a woman at the centre of it. Then I was disgusted with myself that I was shocked by it. Why would I be so shocked? Of course, a woman could have done this.''