Representatives For Jessica Simpson Are Defending The Singer, Actress And Fashion Mogul From Reports She Was Drunk During An Appearance On America's Home Shopping Network On Thursday (17sep15). 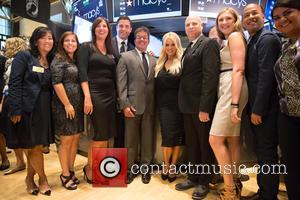 Simpson appeared to slur her words as she talked about her latest clothing line on The List With Colleen Lopez, but her reps insist she was tired, not inebriated.

And HSN bosses are more than happy with her appearance, as the Simpson collection she was selling on the network sold out.

A spokesperson says, "It was fun to have Jessica make her HSN debut with her mother Tina last night. We were happy to host them and thrilled with the way customers responded to the collection."

And host Lopez tweeted a photo of herself posing with Simpson and added, "Thank you so much for watching tonight! Congrats to Jessica Simpson and her Mom, Tina on a sell out show!!"

But viewers and fans felt sure the singer was more than a little tipsy and took to Twitter to poke fun at her.

Simpson's reps insist their client was lucid and polished for much of the show, but suggested two hours without a script creates inevitable less than perfect moments, according to TMZ.com.