Jessica Simpson was a ''beautiful golden girl'' at her wedding yesterday (05.07.14), according to fashion designer Carolina Herrera, who designed her ''sumptuous champagne and gold strapless multi-layer tulle gown.'' 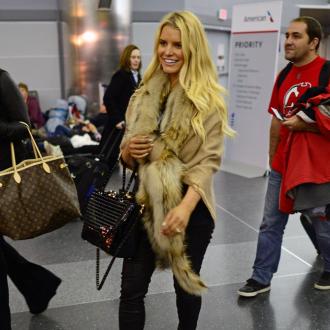 Jessica Simpson was a ''beautiful golden girl'' on her wedding day.

The 33-year-old star married former NFL star Eric Johnson in front of 250 guests, including her sister, Ashlee Simpson, actress Jessica Alba and former 'That 70s Show' star Topher Grace, at the San Ysidro Ranch in Montecito, California yesterday (05.07.14), after teaming up with Carolina Herrera to create her dream dress.

She added it was her goal to transform the blonde beauty, who also wore a cathedral length veil, Brian Atwood shoes and Neil Lane jewellery for her special day, into a ''beautiful golden girl.''

The duo met at Vanity Fair's Oscars afterparty in Los Angeles in 2010, and Carolina stitched a blue ribbon on the inside of the gown for Jessica's something blue.

She said: ''I always do that because I think it brings good luck.''

The 'With You' hitmaker, who has daughter Maxwell, two, and son Ace, 12 months, with Eric and was previously married to Nick Lachey until 2006, was expected to wear a non-traditional dress for her second stint down the aisle.

A source close to the Weight Watchers spokesperson recently told OK! magazine: ''One of her biggest weight-loss motivators has been looking great in her wedding dress. She's actually helped design it, and one thing is for sure: It will not be traditional! Though Ashlee tends to be the edgy one and Jessica usually hews more to her Southern roots, she wants to surprise everyone with something entirely different this time around.

''It's not going to be white, for starters. It's going to be elegant and sophisticated but very fitted to show of Jessica's brilliant body!''