Jessica Simpson has posted a picture of her and boyfriend Eric Johnson on twitter and says she feels ''lucky'' to be dating the NFL player. 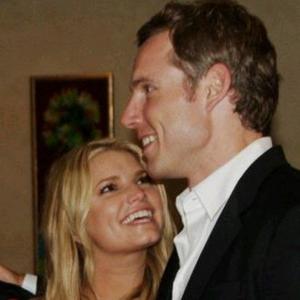 The singer-and-actress started romancing the NFL footballer earlier this year and is so smitten with him, she has posted a picture of the pair on her twitter account to show their love off to the world.

As well as declaring their love on twitter, Jessica recently made out with Eric during a dinner with her mother.

The 30-year-old beauty was enjoying a lunch with her mother Tina and friends at Mexican restaurant Dos Caminos in New York but found it hard to keep her hands off her man and couldn't resist The Urge to kiss him during the meal.

A fellow diner said: "He always had a hand on her back, was touching her hair and kissing her head. They made out a few times!

"She looked super happy. And he was very attentive to her. They looked like they've been dating for ages."

Although she has been romantically linked to Smashing Pumpkins singer Billy Corgan, Jessica hasn't been in a serious relationship since ex-boyfriend Tony Romo dumped her on her 29th birthday last year.