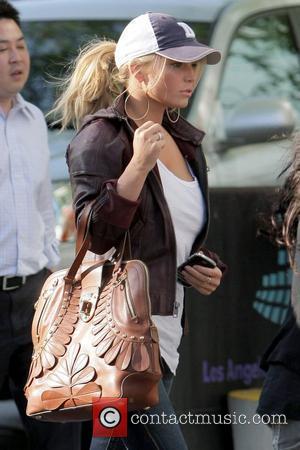 Picture: Jessica Simpson arriving at the first game of the NBA National Championship Tournament between the L.A. Lakers and Orlando Magic at the Staples Center Los...

Jessica Simpson has a reason to smile following her split from Tony Romo - she's trumped him in the earnings stakes.
The singer/actress was reportedly left devastated after she was dumped by the American footballer on the eve of her 29th birthday earlier this month (09Jul09).
But Simpson has something to celebrate - she earned $20 million (£13.33 million) during the last year (08-09), overshadowing Romo's total annual fortune of $13.25 million (£8.8 million), according to Forbes magazine.
The blonde beauty's income is largely from her Jessica Simpson accessory collection, with the publication adding, "Jessica has an incredibly successful licensing empire."
Meanwhile, her former beau Romo has signed a $67.5 million (£45 million) contract with his American football team, the Dallas Cowboys - but it's spread over the next six years. He also has a $10 million (£6.7 million), five-year deal with a sportswear company, making up the remainder of his annual earnings.