'Sweet Talker' singer, Jessie J was ''nervous'' about returning to Camden for an impromptu secret gig. 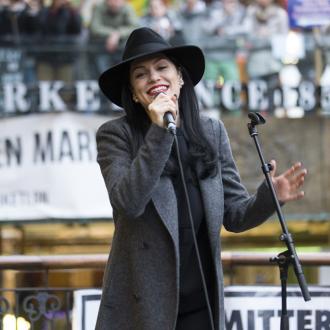 Jessie J was ''nervous'' about busking in Camden Town.

The 'Sweet Talker' songstress hit the streets of Camden Market yesterday (06.10.14) to perform a secret gig for fans in north London and though she was apprehensive about returning to the scene of her early gigs, she felt it was a fitting send off ahead of a number of shows outside of the UK.

She said: ''One of my first ever gigs was at The Stables and I'm really nervous!

''I fly out tomorrow for quite a while, so this is a nice memory for me to have before I fly out and go around the world for a little while.

The singer then kicked the session off with the track 'Sweet Talker', from her upcoming album of the same name.

She then joked to fans about her ''unprofessional'' performance style, as she admitted to singing the tune with chewing gum in her mouth.

The 26-year-old star said: ''I just realised that I'm hiding chewing gum under my tongue. Which is so unprofessional. And then I panicked because it was there and I was like, 'It's going to come out!'''

Her fans were then treated to a rendition of 'Price Tag', before begging to hear an excerpt of her new single, 'Masterpiece'.

She later wrote on Instagram: ''My amazing fans shouted out sing masterpiece that Lewis [her guitarist] and I have practiced once and never sung! I love a challenge! (sic)''

Jessie then sang 'Burnin' Up' although she admitted that she wouldn't be attempting the rap part of the song, which is usually performed by 2 Chainz.

She finished the show off with 'Bang Bang' after asking her fans to ''let go'' of any bad feelings and to ''be free''.