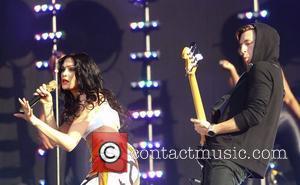 Jessie J has scrapped a stately home show in northern England as she continues to battle an "unexpected illness".
The Domino singer cancelled a performance at the Ponty's Big Weekend event in Pontypridd, Wales on Friday night (20Jul12) because she was too sick to go onstage - and she has pulled the plug on a second weekend show at Alnwick Castle in Northumberland.
The pop singer has been diagnosed with a virus which is causing her "considerable fatigue" and doctors have advised her to rest.
Jessie J took to Twitter.com to apologise to fans about pulling out of the Welsh show, and admitted the bug has left her too tired to perform.
In a series of posts, she writes, "I want to personally apologise to all my fans who would be going to my show tonight. I have been diagnosed with a viral infection recently that has caused me to be extremely fatigued."