Jessie J will return for The Voice Australia live shows

Jessie J will return for the 'The Voice Australia', despite a mystery illness that's left her in hospital. 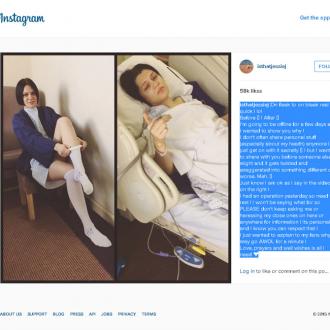 Jessie J will be returning to Australia for 'The Voice''s live shows, despite her mystery illness.

The 27-year-old singer - who has become the newest judge on the show following her stint as a coach on the first two seasons of 'The Voice UK' - recently posted photos of herself in hospital on Instagram, but TV producers have assured viewers that she'll have recovered in time for the live shows.

Speaking to the Mail Online, a Nine Network spokeswoman said: ''We are sending our very best wishes for a speedy recovery to Jessie.

''We do not anticipate her illness impacting her return and we look forward to welcoming her back for the show in the coming months.''

The 'Who's Laughing Now?' hitmaker posted photos on Instagram of her hooked up to a drip in hospital earlier this week, revealing she'd had an operation but won't be revealing any further details about her illness.

She said: ''Being human sucks when you are non stop and your body says NOPE night right now. Unexpected but I'm here trying my best not to let it win (sic)''.

'The Voice''s season launch episode on Sunday, which was pre-recorded months ago, was its lowest opening night on Australian television but still topped the ratings.

Some 1.557 million people tuned in to watch the reality singing show, compared with last season's opener that reached 2.155 million viewers.