Jessie J has admitted she is worried about giving the speech to introduce the tribute to Amy Winehouse at the MTV EMAs in Belfast tonight (06.11.11). 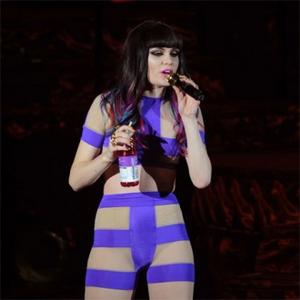 The 'Pricetag' singer will honour the tragic musician - who was found dead at her home in Camden, north London earlier this year - at the ceremony at Belfast's Odyssey Arena and while Jessie is thrilled that Amy is being recognised, she admitted it will be an emotional experience.

Speaking on the Pink carpet, she told BANG Showbiz: "I'm honoured that I've been asked to introduce the tribute to Amy. I really wish she was here and I think it's going to be difficult not to cry. I also think I wouldn't be standing here if it wasn't for her, she brought a standard to British female soloists that hadn't been there before. She broke the boundaries so I owe her and I don't want to let her down. I hope I can put all of that into my speech."

Meanwhile Jessie, who is nominated for two awards - Best New Act and Best Push - revealed she can't wait to perform tonight because after breaking her foot earlier this year, she is determined to show her fans that she is still working hard.

She said: "It feels very humbling to be here after 12 months of craziness. I've got a lot to prove to my fans tonight, I want them to know that I love them and I'm still working away.

"I'd rather be running around performing lots than not be here."

The 2011 MTV EMA airs live from Belfast tonight on MTV.