The Voice Recap: Jessie J Performs As Cheesa And Katrina Are Saved 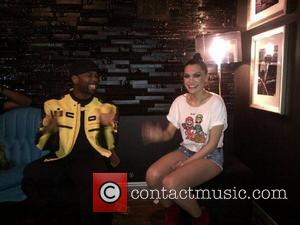 Picture: Jessie J posted this picture on Twitter with the caption 'Oh what I night. I met one of my vocal heroes @BSLADE what an...

Last night's episode of The Voice in the U.S. kicked off with one of the UK judges showing off her own talent. Jessie J performed her song 'Domino', before she was joined onstage by the members of Christina Aguilera's team of singers. Then came the results, to see which of the contestants were going to topple.

The three singers left languishing in the bottom three for Cee Lo's team were Tony Vincent, Cheesa and Erin Martin. Tony, the Broadway star, sang a dramatic version of Eurythmics' 'Sweet Dreams,' playing on the darker, rockier side of the song and eliciting an earnest show of support from Cee Lo Green. Cheesa, the 21 year old from Honolulu performed a version of 'All By Myself,' looking serene in a floor length pastel dress and belting out the chorus to great effect. Erin Martin performed Elton John's 'Your Song' but her unusual voice wasn't enough to save her. The judges opted to keep Cheesa in the contest.

On Adam Levine's team, Kim Yarbrough, Karla Davis and Katrina Parker were the ones to choose from and Katrina Parker's version of No Doubt's 'Don't Speak' moved Adam enough to save her. He was shown watching the performance with closed eyes, making sure that he focused on the singers' vocal performances. Despite 40 years in the business, Yarborough's performance of Jennifer Hudson's 'Spotlight' wasn't enough to save her. And Davis' performance of Bonnie Raitt's 'I Can't Make You Love Me' turned out to be sadly prophetic as she, too was sent home.