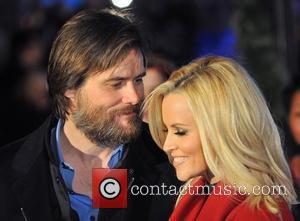 Jim Carrey, Colin Firth and Bob Hoskins switched on London's Christmas lights as thousands of people attempted to break the record to hold the world's biggest carol sing-a-long.
The Hollywood trio - who star in a new adaptation of Charles DICkens' A Christmas Carol - simultaneously switched on the British capital's festive illuminations at three different parts of the city centre on Tuesday (03Nov09).
Over 50,000 revellers flocked to see the stars do the honours, while 14,000 singers, led by opera legend Andrea Bocelli, tried to get into the Guinness Book of Records by staging the largest carol singing event in history.
And Carrey insisted he was honoured to be at the centre of the celebrations: "It feels great to be a part of all this tradition.
"I want to thank the people of Britain for the legacy of Charles DICkens and the chance to tell this story. This story couldn't be more important now - it's about the immorality of greed."