Jim Carrey has revealed he has a huge crush on Emma Stone and wants to marry the actress in a video blog post. 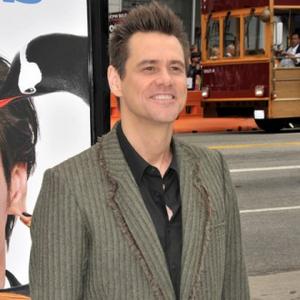 The 49-year-old actor has filmed a video blog in which he confesses he has a huge crush on 'The Amazing Spider Man' actress - who is 27 years younger than him.

In the comic video posted on his official website, he says: "Emma, I think you're all the way beautiful. Not just pretty, but smart and kind-hearted. And if I were a lot younger, I would marry you. We would have chubby little freckle-faced kids.

Jim - who split from former Playboy model Jenny McCarthy after five years together in April 2010 - acknowledged the age gap in the video, and jokingly admitted a relationship between the pair would be inappropriate.

He added: "And every day, for the rest of your life, you would thank God that I was the appropriate age for you. But I'm not. I'm 49.

"I have lines on my face, sometimes a little gray in my beard, and it takes me a little bit longer to pee than it used to."

He signs off the video by wishing Emma - who is rumoured to be dating her 'Spider Man' co-star Andrew Garfield - the best with her career.

She said: "Anyway, I just wanted to let you know how I felt. I think you're very special and I wish you continued success and artistic fulfilment. But most of all, I wish you love and contentment."