The forthcoming Jimi Hendrix biopic 'All By My Side' - starring Outkast's Andre 3000 - will not feature any music written by the legendary guitarist. 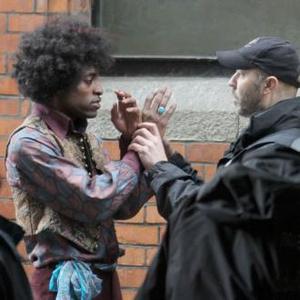 A biopic about Jimi Hendrix will not include any songs written by the legendary rocker.

'All By My Side' stars Outkast musician Andre 3000 as the late guitarist, and while he will perform covers of Beatles and Muddy Waters' songs - among others - there will be no reference to Jimi's own music.

The film is set in London between 1966 and 1967 and is currently being shot in Ireland.

He will, however, be able to play one of Jimi's most famous songs 'All Along The Watchtower' because it was written by Bob Dylan.

Last month, Jimi's sister Janie - who runs his estate, Experience Hendrix LLC - revealed she would not give her permission to allow his music to be used in the movie.

In a statement, she said: ''It has [been made] known many times in the past that no such film, were it to include original music or copyrights created by Jimi Hendrix, can be undertaken without its (the estate's) full participation.''

The movie is planned for release at the Sundance Film Festival in 2013.