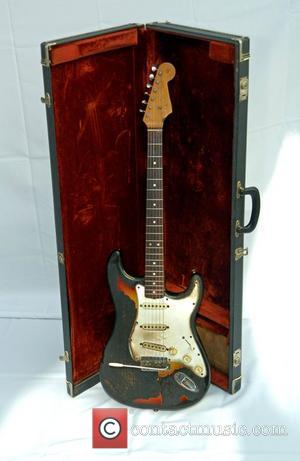 Jimi Hendrix has been named the greatest guitarist ever in a poll conducted by Rolling Stone Magazine. The axe man topped a list that included Led Zeppelin's Jimmy Page, THE ROLLING STONES' KEITH RICHARDS and Jeff Beck, among many others.
Hendrix is now widely recognised as one of the true revolutionaries of guitar playing, but initially the late star was overlooked in his own country and instead found his first success moving across to London and playing local jazz bars and concert venues. It was whilst in England that he met the group who came to be the rest of THE Jimi Hendrix EXPERIENCE, former drummer Mitch Mitchell and bassist Noel Redding. There are many stories about Hendrix from his time spent in the UK, from appearing on stage and outplaying Cream's Eric Clapton in a guitar face-off, to learning and playing live the entire of The Beatles 'Sgt. Pepper's Lonely Hearts Club Band' just one day after its release. Whether these stories were embellished or not, it was in the UK where Hendrix honed his craft and the rest, as they say, is history, as he made a startling break through with 1967 debut album 'Are You Experienced?' and going on to stun the audience at Monterrey Pop Festival that year with a dazzling finale of The Troggs' 'Wild Thing' which saw him set fire to his guitar at the end of the show - an iconic moment.
Though Hendrix star continued to rise prolifically after that, critics would argue it was at this point that he was his raw finest, before drug and alcohol dependency kicked in. Nevertheless he and The Experience completed two more studio albums and Hendrix also went on to headline 1969's Woodstock, his rendition of the 'Star Spangled Banner' going down in folklore, whilst UK crowd point to his appearance at the Isle of Wight Festival the following year as a defining moment in rock history. He was found dead later that year after choking on his own vomit.