Jimmy Fallon U2 Bono The Edge

Jimmy Fallon requires another operation on his hand after almost severing his finger in a freak accident in June. 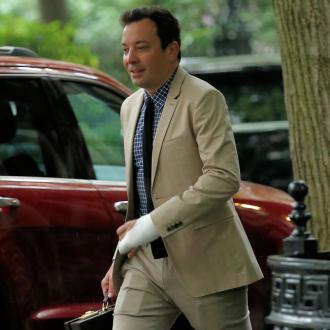 The 'Tonight Show' host came close to having his finger amputated in June following a freak accident at the home he shares with wife Nancy Juvonen and their daughters Winnie, two, and nine-month-old Frannie, and he still hasn't made a full recovery.

He admitted: ''It's a bummer, but you can't get depressed.''

Following the accident, Jimmy was pleased to receive messages of support from U2 rockers Bono - who fractured several bones after falling off his bicycle last year - and The Edge, who fell off stage in May.

Jimmy told Billboard magazine: ''Bono was one of the first emails. He said, 'Welcome to the club, my Irish brother.' And Edge sent me a thing. He fell too! I mean, it's insane. I go, 'Why are we all falling? What the hell is wrong with us?' ''

Jimmy previously admitted his injured finger looked ''fake'' because of the angle it bent at.

He said: ''So basically what happened is, I tripped and fell in my kitchen on a braided rug that my wife loves and I can't wait to burn it to the ground. I tripped and fell and I caught my fall... I'm getting up and my finger is sideways.

''So I go, 'Oh my god, did I just break my finger? This is the lamest thing in the whole wide world. It completely looks fake. It looks like a cheap horror movie where you see a broken finger.

''Basically what it is is that my ring got caught on the countertop when I was going down and stuck there and pulled my finger off.''

The 40-year-old presenter sought treatment at Bellevue Hospital in New York City, and despite being warned the odds of keeping his finger ''weren't great'', doctors managed to save the digit and implanted a vein from his foot into his hand.