Jimmy Fallon wants his 23-month-old daughter Winnie to take fewer toddler classes as she is already smarter than him. 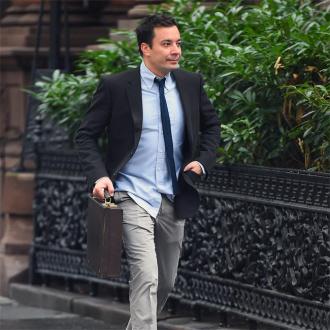 Jimmy Fallon says his eldest child is already smarter than him.

The 'Tonight Show' host, who has daughters Winnie, 23 months, and Frances, six months, with producer wife Nancy Juvonen, also believes Winnie is ''going to be too smart'' in the future.

Asked about the biggest challenge he faces as a father, the 40-year-old star said: ''My wife is a natural at this, but I'm still figuring it out. She's already got them in classes where they sing 'Wheels on the Bus' and shake rattles. Winnie is already getting smarter than me, which is the sad thing. She's going to be too smart, and I'll have to make her stop taking classes just so I can relate to my own child.''

The couple welcomed both their children via surrogate after struggling to conceive themselves for several years.

But the chat show host is thrilled they were able to have a family and enjoys every minute.

He told People magazine: ''I've got the bags under my eyes, but I love every minute of being a dad. I look forward to every single day.

''I just look a photos every single second, all day. You become that annoying guy. I said I would never do that, but now it's like, 'Wanna see a picture of my kids?' I'm even showing it to the cabdriver.''