Jimmy Kimmel Will Become A Father For The Third Time

At 46 years-old Jimmy Kimmel will have a third child after announcing, "It's weird, at my age, I'm going to be one of those old dads." 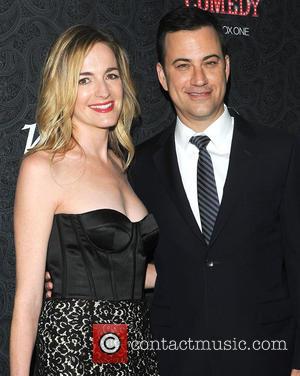 The host of late night talk-show 'Jimmy Kimmel Live!' is going to be a father for a third time.

The 46 year-old and his wife Molly McNearney, a co-head writer for the ABC show, are expecting their first baby together.

Kimmel made the announcement in an appearance on 'The Ellen DeGeneres Show' which will air this coming Wednesday (Feb 26th).

"I'm having a baby . . . wait I want to finish . . . with Ellen," Kimmel jokingly stated. "No, I decided to have the first one with my wife. We got married in July and, you know, it's interesting. It's disgusting the way babies are made."

"Good for you," host Ellen said, before replying, "And why is it disgusting?"

"Well, there are so many human body parts involved," Kimmel responded. "Did you know there are eggs in us? That's gross just to start with."

When Ellen asked if he would be an "involved" father, the TV host replied, "Involved?! Well, I have two kids already. I don't know where they are, but I hear they're doing great."

He then explained, "No, I have a 20-year-old son and a 22-year-old daughter and I've really forgotten everything [about raising a child]."

Kimmel had two children, Katie and Kevin, with his ex-wife Gina, whom he divorced in 2002.

"It's funny because I was just with some friends who just had a baby, I was like, 'Oh yeah.' And there's new ways to do things. You hold them by the front of the neck now it seems," he joked.

Kimmel's "friends" were John Krasinski and Emily Blunt, who have just welcomed their first daughter Hazel at the start of this month.

Kimmel then pondered about having a child this late in his life.

"Well, you're not as old as some dads right now," the daytime TV host said in an effort to comfort him. "You're not that old."

"But I'm getting older every single day," he said, to which Ellen agreed, "That is true."

Watch Kimmel's appearance on Ellen below