JLS want to record a great song with Rihanna and insist they will not get into the studio with the pop superstar until they have found the perfect track. 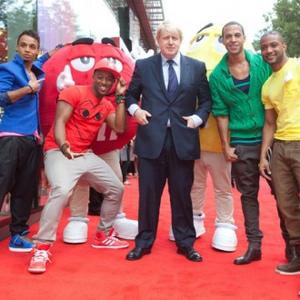 JLS won't collaborate with Rihanna until they find the perfect song.

The British boy band have been in talks with the 'We Found Love' beauty about working on a single together and although both parties are keen, JLS say they don't want to waste anyone's time until they get the right tune.

Marvin Humes exclusively told BANG Showbiz: "Right now our dream collaboration would be Rihanna. Obviously we've worked with some amazing people, Dev and Tinie Tempah, which was amazing but the one person we all want to work with at the moment is Rihanna. "

Oritse Williams added: "There's been rumours about us and Rihanna for a while and we both really want to work together but it's just a matter of finding the right song. On both sides we really want to do it but if we do this collaboration we want it to be spectacular so until we find that song we can't do anything but watch this space."

He said: "We've been over and back to the states quite a bit, we wrote a lot of our fourth album over there. People think we go over there to try and break the American market but we've also used it as a chance to work with some producers that we don't have access to over here. International fans are important to us but it was great to work with some of our musical inspirations and we loved it."

JLS teamed up with MasterCard for its exclusive Priceless Duets competition, which supports its 14th year of partnership with The Brit Awards.

For your chance to win a Priceless Duet go to www.somethingforthefans.co.uk. JLS's competition is now closed, but there's a 'Priceless Duet' with BRIT award winner Jessie J still up for grabs.